Happy Chinese New Year! Thank you for spending the whole year with our podcast. Chinese people have a tradition called kicking off the poverty ghost 送穷 鬼on the fifth or the sixth day of the new year in lunar calendar in different regions of China. So let’s kick our poverty off and welcome a prosperous year. 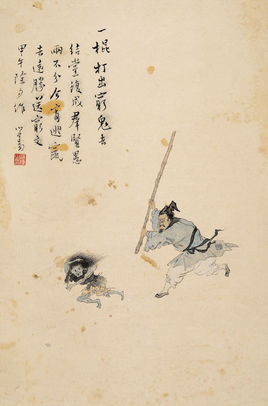 Poverty ghost 穷鬼, is also called the Son of Poverty 穷子. In the book called SuiShiGuangJi 岁时广记 from the Song dynasty 宋朝, it says, ZhuanXu（一声， 一声）, a mythological emperor of ancient China, had a son. The kid never wanted to wear new clothes. If people tried to dress him up, he would tear the clothes apart or burn it until the clothes have holes on and then put them on. The boy didn’t live for long and died on the first month of the new year. People buried him and call him the Son of Poverty.

During the Song dynasty 宋朝, people did something similar like making a boat out of some leaves and light inside with food prepared. When they set it in the river, it meant they sent off the Poverty Ghost.

Today people usually clean the house, dump garbage, light firecrackers and some places people would throw away old clothes. It is kind of make sense that after a few days of the New Year holiday season, the house is probably pretty messy and it is the time to start clean up and wrap up the holiday moon. I think it is the best day to finally learn from Marie Kondo.

Happy new year everyone! It’s 2018! It sounds like we are living in the future. Today we are going to talk about the myth and traditions of Chinese new year. Chinese New Year is the first day in the lunar calendar, which is in either January or February. Nian年 means year in Chinese. In the book Erya尔雅, it says the character Nian 年was first used by the meaning “ year” during the Zhou周dynasty, which is between 1046BC ~256BC. The book ShuoWenJieZi说文解字explains the character 年as ripeness of grains.

Nian is also the name of a horrible monster in folktale. Not really because the year makes you old and slowly kills you though. Since this is not recorded in any books, there are a lot of versions of the story. I don’t know where it is from while it is one of the most well-known story. Some people say Nian lives under the sea and some people believe Nian lives in the mountains. Every 365 days, he would go to villages and eat crops, livestocks and even people especially kids. People lived in the fear and stayed at home on the night to hide from Nian. One year, an old man visited the village, and saw people preparing for the night by blocking windows, locking doors and packing stuff. Everyone looked terrified. An old lady from the village saw him and said “go and hide somewhere because the monster Nian would come this night!” The old man was surprisingly calm and said, “ If you allow me to stay at your home for a night, I can help you.” The lady was skeptical but she took the old man home. At midnight, Niancame as usual. He came to the lady’s yard and got scared by the red paper on the door and bright lights in rooms. Nian shook a little and tried to attack. Approaching the gate, Nian heard a loud sound and it kept going. It was fireworks. It turned out Nian feared red color, fire and loud sounds so he ran away. Since then, everyone started to put fireworks and red decorations and stay up whole night to scare away Nian. So Nian comes every year like the evil Santa in Futurama. Although this story about Nian is a folktale, it correlates with ancient legends of using firecrackers to drive off beasts in the mountains called ShanXiao 山魈 .