Today we will talk about a kind of ghost in Chinese mythology called The Five Gentlemen with One Eye 一目五先生 from the book What The Master Would Not Discuss 子不语, a collection of supernatural stories compiled by Yuan Mei 袁枚 during the Qing dynasty 清朝 published in 1788. 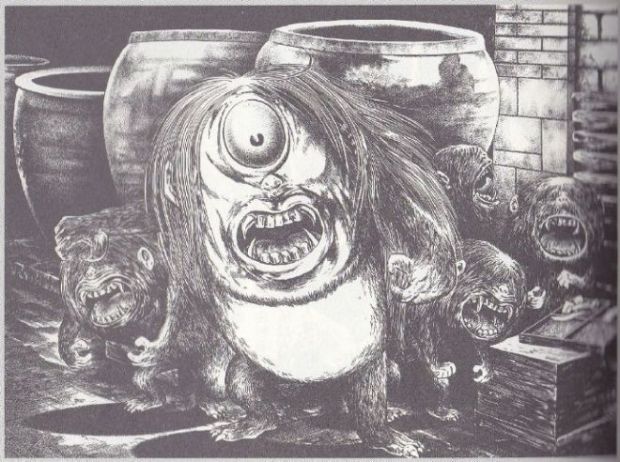 We actually mentioned this book a few times but in Chinese name. The title of the book is appealing in which the master refers to Confucius. Because in the book Analects 论语, it says “Confucius did not speak of strange events, violence, riots and supernatural things.”, yet this book is about the supernaturals.

In the book, it says, there were a group of five ghosts in Zhejiang Province 浙江, of whom four were blind and only one had one eye. All relying on this one eye, the ghosts were able to see, so they were called “The Five gentlemen with One Eye.” A pandemic struck one year in the region and the five ghosts decided to take advantage of this. They always waited until people were in deep sleep and draw their noses close to sniff them. Maybe it is like sucking people’s souls. If one ghost sniffed the person, he or she would be ill. And if all five ghosts sniffed a person, he or she would die. Since four of the ghosts were totally blind, they were always aimlessly wandered around. They staggered about and all they did was to wait for the one-eyed ghost to give orders and they would comply.

There was a Mr. Qian 钱 once stayed in an inn. At night, everyone fell asleep except him. Suddenly, the candlelight went dim and he saw the five ghosts jumped into the room. The four blind ghosts were about to sniff one guest, the ghost with one eye said, “that is a very kind man. We can’t hurt him.” The four blind ghosts were about to sniff another person, but the one-eyed ghost said, “that is a very lucky man. We can’t hurt him.” Then the four blind ghosts asked, “sir please tell us who can we eat? ” The one-eyed ghost pointed two people and said, “they are neither kind nor evil, lucky or unlucky. Why not eat them? ” The five ghosts went ahead and sniffed them. In a moment, the breathe of the two people grew weaker while the belly of the five ghosts grew bigger.

Some people say this story is a sarcasm of the Doctrine of the Mean 中庸, which is a doctrine of Confucianism. Zhong means towards to neither one way or another and yong means unchanging. Part of Zhongyong is about maintaining balance and harmony and otherwise it for sure affects people’s behaviors and ways of thinking like people should obey order and follow the principles. The negative side is just like the story shows most people don’t have their own judgement like having no eyes wondering in the world and accept and follow what other people tell them to do.

子不语 What The Master Would Not Discuss