Since recently we talked about some myths and legends about the moon, I feel like talking about a mythical creature that is considered to eat the moon or the sun during an eclipse. It is TianGou 天狗, meaning Heavenly Dog in Chinese mythology.

Just want to clarify at the beginning, there is a Heavenly Dog called Tengu in Japanese mythology. Name wise, they are the same however, they look totally different and are different creatures. Tengu of Japanese mythology used the name from TianGou however is depicted as a bird or a man with a long nose. While TianGou in Chinese mythology looks more like a mammal.

In the book Classics of Mountains and Seas 山海经from the 4th century, it says, in the area of Mountain Yin 阴山, there is a kind of beast that looks like a leopard cat but the head of which is white and is called TianGou. Its voice sounds like “liuliu 榴榴” and it can help avoid evils. In the book TaiPingYuLan 太平御览from the Song Dynasty 宋朝, it mentions the Heavenly Dogs protected the emperor XiangGong of Qin 秦襄公 from around the the 770 BC from thieves and robbers. 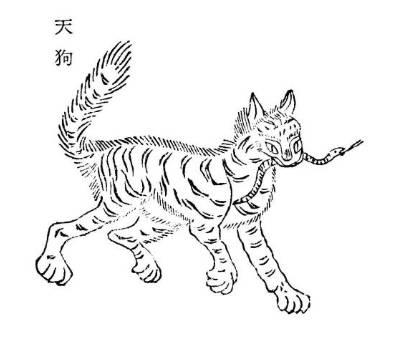 In the book JinShu 晋书from around the year 648, it says people named a star TianGou. Some researchers said the Star of TianGou 天狗星 was the same with the constellation of TianLang 天狼星, the star of the Heavenly Wolf, the Chinese translation of the the star Sirius. This is interesting cause in the west Sirius is also known as the “Dog Star”. So I don’t know if it is a coincident or a misinterpretation.

In the book ShiJi 史记, it mentioned a meteor shower however in a very dramatic way. It says, there were meteors falling down on the ground like dogs. Wherever they landed it caused fire and emitted lights to the sky. So in the ancient time, instead of praying for wishes while seeing the meteor shower, people thought it caused problems.

So the Heavenly Dog evolved from a holy mountain animal like ward off evils to a star to an evil star that caused disasters due to the meteor shower. And this is not finished yet. Poor Heavenly Dog! In the book XieJiBianFang 协纪辨方from the Qing dynasty 清朝, it says, the Heavenly Dog is the evil god in the moon. According to Chinese folklore, we talked about in episode 84, the goddess of the moon ChangE 嫦娥 stole her husband HouYi’s 后羿 elixir of life and ate it. Her body started to get lighter and flew away. Seeing this, HouYi’s black dog licked the remains of the elixir and chased after ChangE. At the same time, the black dog grew bigger and bigger. ChangE got terrified hiding on the moon. The black dog ate the moon and ChangE. After knowing this, Queen Mother of the West 王母娘娘, who award HouYi the elixir of life at the first place, captured the dog and let it spit out the moon and ChangE. She didn’t punish the dog however assigned him the guard the gates of the heaven and became the Heavenly Dog.

I assume since Heavenly Dog eats the moon, when there was a moon eclipse or a sun eclipse, the ancient Chinese thought it was the Heavenly Dog that ate it. People would use anything as a drum or fire crackers to make loud sound and this is supposed to scare away the Heavenly Dog and let him spit out the moon or the sun. This was also a ceremony in the palace. This whole process lasted the whole eclipse and they were so satisfied to see the moon and the sun again. Because beating a drum definitely worked so well.

There is a Taoist god called ZhangXian 张仙 who is considered the enemy of the Heavenly Dog since he protected children from the dog with his bow and arrows. Since he protected the children, he is also considered as the god of birth and the protector of children especially boys in Chinese mythology.

王母娘娘 Queen Mother of the West