Today we will talk about the 7th person in the Eight Immortals 八仙 in Chinese mythology. His name is CaoGuoJiu 曹国舅. Cao is his last name. GuoJiu means imperial uncle, since he is the brother of the Empress.

CaoGuoJiu’s original name is CaoYi 曹佾(yi 四声）from the year 1018 to 1089. He is a real person in history. He is the grandson of CaoBin 曹彬, a general from the Song Dynasty 宋朝 and brother of the empress, the wife of Emperor RenZong 宋仁宗 of the Song Dynasty 宋朝. In a word, he is from the royal family. So apparently among the Eight Immortals, he represents the higher class. 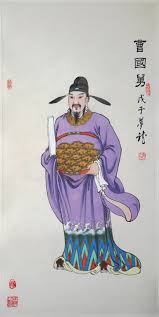 In the history, it says CaoGuoJiu was good at music, playing Go, archery and writing poems. His personality was warm and peaceful. In Taoism and Chinese mythology, he has least stories among the Eight Immortals and the records about him being an immortal is the most recent.

CaoGuoJiu has a younger brother called Can JingZhi 曹景植. As the youngest in the siblings, he was so spoiled growing up. Abusing his family background and social status, he bullied others and engaged in corruptions. He did countless unforgivable practices. CaoGuoJiu tried to educate his brother several times and was in vein. Feeling ashamed by his brother, CaoGuoJiu donated his fortune to the poor as a way to make up for his brother’s misdeeds.

Until one day, Cao JingZhi was accused of corruption and abuse of power to the emperor. He was deprived of his title and fortune and was exiled. Having lost his beloved brother, Cao GuoJiu decided to give up all he had and went to the countryside to practice Tao. During this period of time, he encountered ZhongLieQuan 钟离权 and LvDongBin 吕洞宾 . They asked him, “what are you practicing?” CaoGuoJiu replied, “I am practicing the Tao.” They asked, “where is it?” He pointed up and said, “Tao is in the heaven.” They asked, “where is the heaven?” He pointed his heart. The other two immortals laughed and said, “you already get the essence of Tao” and gifted him 啊Taoism book called HuanZhenMiZhi 还真秘旨. Following the instructions to practice, CaoGuoJiu became an immortal.

It is always amazed how a person who had fortune and high social status decided to become an immortal like Siddhartha gave up everything without any reason and founded Buddhism.