Today we are going to talk about the third immortal in the Eight Immortals 八仙. He is known as ZhangGuoLao张果老. ZhangGuo is his real name and Lao means the old. Just from the name we know he is an old man and he is the immortal representing the old. ZhangGuo was a real historical figure from around the year 600~900 during Tang Dynasty唐朝. He was a Taoist alchemist and he claimed to be several hundred years old.

He is depicted always an old man riding his white mule facing backwards holding a fish drum 渔鼓, a tube-shaped drum made of bamboo. It is said his mule never drink or eat and when he doesn’t need the mule, he could fold the mule like paper and put it into pocket. He just spit water on it when he needs the mule again. 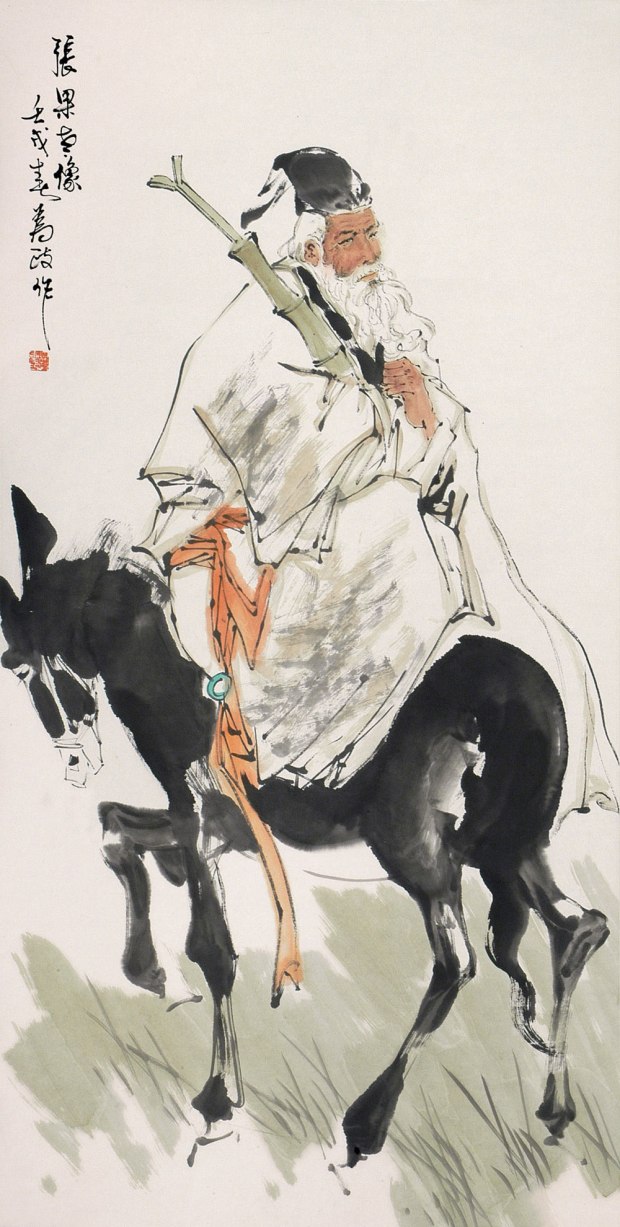 There are a couple of stories about why he rides the mule facing backwards. One story says the famous bridge called Zhaozhou Bridge赵州桥 in Hebei province河北 was built by Luban鲁班, one of the most well-known carpenter, engineer and inventor from Zhou Dynasty周朝 . I know he didn’t live in the same dynasty with ZhangGuoLao. Those forktales just like to put famous people together in one story.

Anyways, after the bridge was built, ZhangGuoLao was a naughty old man. He challenged Luban and said, “let’s have a bet to see if your bridge is sturdy enough to let me pass it with my mule.” Of course Luban looked at the old man and mule and said”challenge accepted! ” ZhangGuoLao said, “if you win I will ride my mule backwards in the future. Otherwise, please leave this place and don’t call yourself the top builder in the world”. At this moment, two other people ChaiWangye柴王爷and ZhaoKuangyin赵匡胤 said,”what about us?” Those two people are historical figures as well later became legendary god in Taoism. Luban didn’t care about two more people to join. So the challenge started.

Since all these three people are not normal people but Taoism gods, they wouldn’t just walk through the bridge like us. ZhangGuoLao did some tricks to gather stars and the moon the sun and hid in his clothes. The other two gods gathered the five most famous mountains. The mule started to feel the weight and breathed really heavily then the bridge started the shake. Luban saw this and jumped into the river and used on hand to hold the bridge. In the end the three gods passed the bridge safely and ZhangGuoLao lost. That’s why he is riding his mule backwards now to keep his promise.

In the book MingHuangZaLu明皇杂录, it says theTang Dynasty唐朝 emperors Taizong太宗 and Gaozong高宗 invited ZhangGuoLao multiple times to their imperial palaces for the secrets of longevity and he never went. Once Empress Wu 武则 天 invited him again and he finally agreed to come. Guess what. On the road he faked to die in front of a temple called DuNv Temple 妒女庙 like insects faking to die. His body stared to decomposed and being consumed by worms. So persuasive and real! But later he was seen alive and well in the Mountain ZhongTian中天山 .

In the year 735, the Emperor Xuanzong玄宗 heard he was alive and invited him again. Those emperors are just so determined to see him I think the reason is to ask him about the way for longevity. He faked death again for a couple of times until he couldn’t refuse more and went to the palace.

When Emperor Xuanzong asked him why he still looks like an old man with few hair and teeth in spite that he knew the way to longevity. ZhangGuoLao replied, “there is a way : if you knock off your teeth and pull off all the hair you can grow new hair and teeth.”and he did it in front of the emperor and miracle happened. ZhangGuoLao looked like he grew back new teeth and dark hair again. Of course the emperor wouldn’t do that and failed to get his real secret to live forever. However, impressed by Zhangguolao, Emperor XuanZhong entitled him as”perspicacious Teacher 通玄先生” and willing to give the marriage of his sister to ZhangGuoLao. ZhangGuoLao refused by singing a song and left.

Maybe this is not related with the story. I just thought about the news I saw last year. A lady from Spain lied to everyone that she was blind cause she was anti-social and didn’t want to greet people. It turned out the news was fake though. If you can do a good job like Zhangguolao you probably can avoid some social situations.