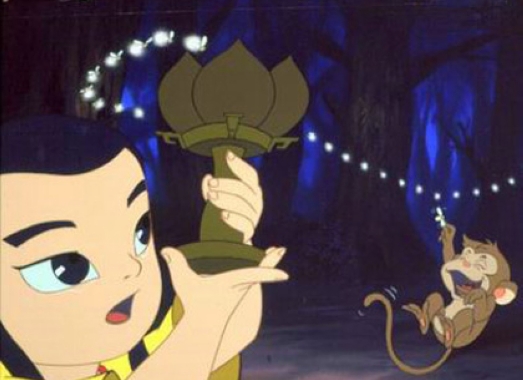 Today we will tell a story about a brave boy who cleaved the mountain to save his mother. It is one of the most well-known stories in many ancient plays and Chinese operas and is still popular in today’s TV shows and movies.

This kid’s name is ChenXiang 沉香, which means agarwood, a fragrant dark wood used in incense, perfume and medicine formed in the heartwood of various Asian evergreen trees when they become infected a fungus. It is popular in China but it is originally from India. It is an interesting name and you will find out where his name soon.

It says this story happened in the Tang dynasty 唐朝. There was a scholar called LiuXi 刘锡 from the place YangZhou 扬州. Both of his parents passed away and he was poor but ambitious. He decided to attend another round of the Imperial Exam in the capital.

He traveled from his hometown to the capital. What a long journey! One day he arrived the Mountain Hua 华山. He heard there were many temples on the Mountain Hua and he entered one of the temples. This decision changed his whole life.

The temple he entered was for worshiping the goddess SanShengNiang 三圣娘 or SanShengMu 三圣母. LiuXi not only asked the goddess for a good ranking in the exam but also before he left he wrote a poem on the wall of the temple. The poem is for the goddess that he expressed his love for her.

The goddess SanShengNiang at that time wasn’t in the temple. She was attending the bouquet held by the Queen Mother of the West 王母娘娘, we talked before in our episode 74. However, she was informed by other gods in the temple and got ashamed and raged. I think the reason can be: first she was a goddess but he was just a human. Considering the hierarchy in the ancient China, this is not appropriate. Second, it was not very moral for men and women to flirt if they were not married. Not to say LiuXi wrote on the wall that everyone could see. It probably equals to sexual harassment today. Third, temples are holy places that should be maintained well. LiuXi just wrote on the wall which was a disrespectful behavior.

When LiuXi left the Mountain Hua and headed to the east, he saw clouds suddenly coming towards him and then followed the thunder and lightening. He ran to a tree for shelter. SanShengNiang saw him under the tree and thought it was the perfect timing to hit him with the lightening. At that moment , someone shouted, “wait! Wait!” It was TaiBaiJingXing 太白金星, a Taoist god which is defied of the star Venus. He is the envoy of the Jade Emperor 玉皇大帝. We will talk about him in our future episodes.

TaiBaiJingXing asked, “why are you trying to kill that man?” SanShengNiang told him all. TaiBaiJingXing laughed and replied, “this man can not be killed by you. You and him have the destiny of marriage. ” SanShengNiang asked the reason. TaiBaiJingXing explained, “LiuXi was a Taoist priest in his previous life. He traveled far and helped the poor. He already built this fate with you in this life. If you don’t trust me, I can show you the the book listing marriages.” We talked about the book listing marriages in our episode 20 about YueLao 月老, the matchmaker. SanShengNiang checked the book and was still confused, “he is just a human. How can we match with each other?” TaiBaiJingXing replied, “it is the fate that nothing can be changed.”

SanShengNiang was convinced. She thought, the poem was rude and inappropriate but it did show his feelings for me. I shouldn’t turn him down. Plus, it is getting bored staying in the temple, it would be fun to live like a normal human. She told TaiBaiJingXing, “if this is my fate, I have nothing more to say.” TaiBaiJingXing said, “it is great!” and disappeared.

We will continue our story in the next episode.