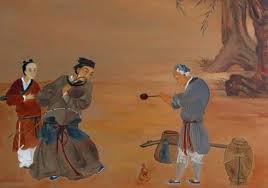 Today we will talk about a story of a mysterious oil seller. The story is from the book Miscellaneous Morsels from Youyang 酉阳杂俎 from the Tang dynasty 唐朝 around the 9th century.

In the book, it says one night an official got off work and walked back home. While he was walking in a narrow path, he saw a person selling oil walking towards him. The person was wearing a big straw hat and led a donkey carrying two big oil bottles. It seemed like the person didn’t see him and walked right towards him. The assistant of the official saw it and pushed the person a little bit. Oops! The head of the oil seller fell off. This headless oil seller ran away in a hurry with the donkey into a mansion.

The official thought what’s going on! So the assistant ran after this oil seller and until he disappeared in front of a pagoda tree in the yard. They told the owner of the mansion what happened. The family decided to dig down the tree to find out the truth.

Now they released the toad was the donkey, the caps of the brush pens were the two oil bottles that the donkey was carrying and the white mushroom was the oil seller. The family said many people in this neighborhood recently bought oil from this oil seller and were curies why the oil was cheap and tasty. So clearly the oil was the juice from the tree.

However, after the fact was revealed, everyone who ate the oil all vomited.