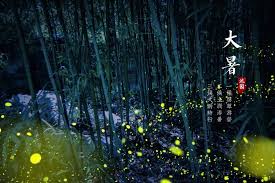 It is the end of summer and start of fall. Today I want to share a romantic belief in ancient China. It is called FuCaoWeiYing 腐草为萤, meaning decaying grass become fireflies.

In the book Book of Rites 礼记from the Warring States period 战国时期, a collection of texts describing the social forms, administration, and ceremonial rites of the Zhou dynasty 周朝 around 2000 years ago, it says decaying grass become fireflies.

In the book YiZhouShu 逸周书, a compendium of Chinese historical documents about the Western Zhou period 西周 between the 1045 BC to 771 BC, it says, on the day of DaShu 大暑，decaying grass become fireflies. The traditional Chinese calendar divide a year into 24 solar terms. DaShu is the 12th solar term and usually begins around July 23rd and ends around August 7th. If the decaying grass doesn’t become fireflies, there wouldn’t be a harvest that year.

It is not hard to think why ancient Chinese though fireflies are the reincarnation of grass since fireflies are found in marshes or in wet, wooded areas where their larvae have abundant sources of food. But I am amazed by the idea that grass decays during the long humid and hot summer while fireflies emerged from the death as a continuation of life lightening up the nights. After 20 days of life span, the fireflies will be burred and wait for the reborn in the coming year.