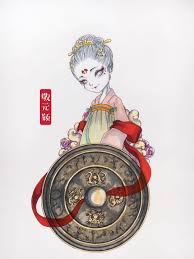 Wells is a mysterious object and symbol in Chinese culture. It existed in the yard of a household or village where people get water from everyday while it can’t be seen to the deepest bottom. Today we will talk about a story about a girl in the well.

This story is from the book BoYiZhi 博异志 from the Tang dynasty 唐朝 around the 9th century. In the book, it says during the reign of Emperor Xuanzong of Tang 唐玄宗, between the year 742 ~756, there was a man named Chen Zhonggong 陈仲躬 from the place called JinLing 金陵. His family had money and he liked reading and writing. He moved to the capital Luoyang 洛阳 and rent a house. There was a well in the yard and the opening was kind of bigger than usual. People could easily fall into it. Chen Zhonggong was worried but didn’t think much since he was alone and had no families here. He usually stayed in the room for many days reading without stepping out of the door.

The neighbor had a teenage girl and got water from the well everyday. One day, she fell into the well and drown. The water level was deep and the body was got out after a whole night.

Chen Zhonggong thought it was strange and stood next to the well to check. Suddenly, a face appeared on the water. It was a young beautiful girl’s face. The girl was dressing well and looking at him with a smile. Chen Zhonggong was bewitched and staring at her back. He felt he couldn’t control his mind or body. He sighed and said, “this is the reason people get drowned here.” then he left.

After a few months, it was a drought season. But the water level in the well kept still. One day, the water in the well suddenly was gone. Early in the morning, a girl knocked on the door as introduced herself as Jing Yuanying. 敬元颖. Zhonggong opened the door and it was the girl he saw in the well. The girl was wearing green clothes and the most fashionable accessories and make up.

Chen Zhonggong let her seated and asked directly, “why do you kill people?” Yuanying said， “I am not the one who kills. It was the evil dragon in the well. The well was opened since the Han dynasty. There are five evil dragons in the capitol Luoyang and this is one of them. This evil dragon is sneaky and liked to drink human blood. I accidentally fell into the well and was threatened by the dragon to seduce people so it can suck blood. Last night, all the dragons were called for a meeting about the drought and it won’t be back for three days. You didn’t bewitched by me and I am sure you can help me. The well is dry and please let people to clean the well so I can escape. I can help you with anything in the world.” After the words, the girl disappeared.

Chen Zhonggong found some workers to get inside the well to clean the well. All they found was a copper mirror at the bottom, around 30 centimeter in diameter. Chen Zhonggong washed the mirror carefully and put it in a casket and burned incense around it as a cleaning ceremony. The copper mirror was the girl Jing Yuanying. After a couple of hours, the girl walked into the room and bowed in front of the candles, “I can’t express how much I am grateful for your help for saving me from the filthy mud in the well. I am the seventh mirror out of the 12 mirrors made by Shi Kuang 师旷. ” Shi Kuang was a famous musician from the Chun Qiu period in Chinese history around the 5th century BC. “I was dropped in the well by a maid. People tried to get me out all drowned and I am lucky to meet you that I am out of the well. Please move out of here tomorrow morning.” 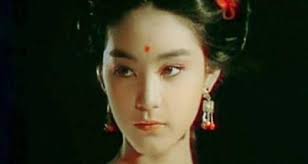 Chen Zhonggong said, “I am afraid it is difficult to find a place to rent in such a rush.” The girl said, “ don’t worry about it. Just go and pack.” she bowed to him and said, “this could be the last time you see me like this.” Zhonggong asked, “how do you seduce women or kids looking like this?” Yuanying said, “I can change to anything.”

The next morning, a person came to pick up Zhonggong to move to a new house. After three days, the old house collapsed.