Today we will tell a kind of disturbing story. Please feel free to skip this episode if you have vermiphobia or if you are eating.

This story is from the the book YiYuan 异苑, a collections of stories about the supernatural from the Southern dynasty 南朝 between the year 420 ~ 589. It says in the year 409, a person took a boat from Guangzhou 广州, a city in the southern China and when the boat pasted by Jiangxi 江西, a place in the southeastern China, many people died of plague. When the boat pasted Caizhou 蔡州, a place in the south central China, the plague ended but people found the dead people’s hair became eels. 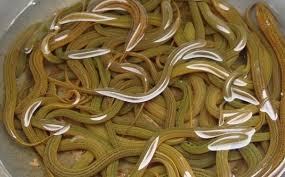 In the place Zhenxi 镇西, a place in the southwestern China, people found a coffin near a river. They saw some eels on the coffin and opened it to see what is in it. The dead people’s hair became eels. Some people said, if the dead people were washed by the water used to wash millet, the hair would become eels. Some people said, a person ate eels a lot where alive, and after he died, his coffin was filled with eels.

This disturbing story isn’t not from nowhere. First, to be more precise, it is not eels in the story. It is swamp eels or Asian swamp eels in the story. They look similar to eels and they are freshwater fish that are omnivore. It is normal that they eat dead bodies of animals including the corpse in the coffin. But instead of thinking the eels went into coffins, people came up with the myth that they were the hair of the dead.

In some places, there is a even more disturbing urban myth and I don’t know where and when it is from. Since swamp eels is in Chinese and some other Asian cuisine, they are farmed in rice fields. But this myth says there are people stole dead body to raise swamp eels. They put the body in the coffin and drilled a small hole on the top. They put some tiny eels in the coffin and leave the coffin the water. So they eels would grow by eating the dead body until they are too big to get out of the hole. Then it’s time to open the coffin and now you have a whole coffin of eels to eat. What a way!