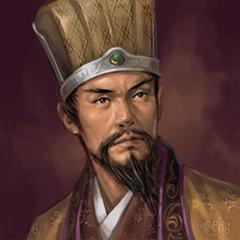 We have talked about a few stories from the book A New Account of the Tales of the World 世说 新语, a book complied and edited during the Liu Song dynasty around the year 420 to 479. The book contains more than 1000 historical anecdotes of more than 600 people who lived in the Han dynasty and Wei-Jin 魏晋 periods. There is even a whole chapter called RongZhi 容止 about men’s appearance during the time.

We have talked about the Four Great Beauties in Chinese mythology. Today we will start a new series about handsome men and we will start from this book A New Account of the Tales of the World.

This story involves a handsome man called CuiJiGui 崔季珪. In the book SanGuoZhi 三国志, it says Cui JiGui has a charming voice like a tenor with beautiful eyes and thick natural eyebrows. He has long beard around 4 chi 尺, which is around 90cm and looks dignified. At that time, men with long and nice beard was considered as masculine and fashionable.

In the book A New Account of the Tales of the World, it says Cao Cao 曹操, a Chinese warlord and the King of Wei 魏 was going to have a diplomatic meeting with the foreign officer of the Xiongnu 匈奴, a group of nomadic people inhabited in the north of China. Cao Cao is a definitely a legend that we will talk about him in the future. He is often portrayed as a cruel tyrant in many literature, however, he is also praised as a brilliant ruler and military genius.

However, he concerned about his appearance before the meeting and thought he wasn’t handsome enough to represent the country. He wasn’t tall at all so he let the handsome Cui JiGui we mentioned earlier to dress up as the Duke of Wei and pretended as the leader. Himself, instead, would stand next to the fake duke as a solider. So he could still be in the meeting.

After the meeting, Cao Cao sent people to ask the official of Xiongnu and asked him, “what do you think of our duke?” The officer said, “King of Wei is for sure outstanding, handsome and dignified. But the person standing next to him is a real hero.”

After hearing this, Cao Cao was really happy and then sent people to murder the foreign officer.

世说 新语 A New Account of the Tales of the World