n Chinese history, there are four women considered as the Four Great Beauties. They are XiShi 西施, Wang ZhaoJun 王昭君, DiaoChan 貂蝉 and Yang YuHuan 杨玉环. They are known for their beauty and they are remembered also due to their influences over the emperors.

There is a idiom to describe how beautiful each of them was. It is called 沉鱼 落雁闭月羞花 meaning the beauty can make the fish sink, birds fall, the moon eclipse and flowers be ashamed.

Today we will talk about the beauty Wang ZhaoJun 王昭君 whose beauty was so entrancing that birds in flight would fall from the sky. Wang ZhaoJun’s original name was Wang Qiang 王嫱from the Western Han dynasty around the year 50 BC. She was born in the a village in the county called ZiGui 秭归. In the year 38 BC, she was selected as a maid to the imperial palace and left her hometown.

According to the custom in the palace, when the emperor chose a new wife, he would first look at all the candidates’s portraits first. Most of the qualified ladies in the palace were desperately to be chosen so they could be one of the concubines of the emperor, they bribed the painter at that time whose name was Mao YanShou 毛延寿 to draw a better portrait of themselves like Photoshop the selfies today. Wang ZhaoJun was a beauty, she didn’t care about bribing out of both her confidence and temperament that she thought bribing was ungraceful. As a result, the painter not only didn’t Photoshop for her but also poorly drew her portrait on purpose. This portrait made Wang ZhaoJun never been visited or seen by the emperor and she was remained as a palace lady in waiting.

In the year 33 BC, HuHanYe ChanYu 呼韩 邪单 于visited ChangAn 长安, the capitol of China at that time. ChanYu was the title of the nomadic supreme ruler of Inner Asia and then was superseded by the title Khagan. In Chinese , we call the nomadic people Xiongnu 匈奴, they lived in the north of China and migrated to central Asia. If you saw the Disney cartoon MuLan, the invaders in China in the movies were one of the nomadic groups.

HuHanYe ChanYu came to China as part of the tributary system between the Han which is the Chinese and Xiongnu, which is the nomadic people. To build allies and stop wars at that time, interracial marriages were one of the most important political means like a lot of places in the world. HuHanYe ChanYu requested to become an imperial son-in-law of the Chinese emperor Yuan of Han 汉元帝. Usually the emperor would offer one of his daughters, however， the emperor was unwilling to offer a real princess but a maid from the palace.

The idea of leaving their home country and the comfortable life in the place and marrying a ruler of a wild nomadic group in the freezing far Siberia was abhorrent to most of the young women in the palace. Wang ZhaoJun volunteered to marry the ChanYu as a sacrifice to the country. The emperor approval by looking at the portrait of her. On the day of leaving, the emperor finally saw how beautiful Wang ZhaoJun actually was and was even considering retracting his decision. But it was too late since he had an agreement with the ChanYu. He finally presented Wang ZhaoJun to him with regret.

HuHanYe ChanYu was so pleased to see such a beauty to his wife and in the history they married for three years and had one son before HuHanYe ChanYu died in the year 31 BC. Following the customs of the nomadic people, Wang ZhaoYun married to her past husband’s oldest son and lived with him for another 11 years and had two daughters before he died in the year 20 BC. Wang ZhaoJun passed away within the next two years. During the decades of years she was married, she made a huge contributions between the Hans and the Xiongnu that there weren’t any wars between them.

The picture we see today of Wang ZhaoJun is often about a beautiful lady wearing a winter cape and was about to begin her new journey to the north on horseback with her musical instrument Pipa 琵琶. It says she started to play sorrowful melodies and a flock of geese heard the music and saw the beautiful ladies forgot to flap and fell on the ground. 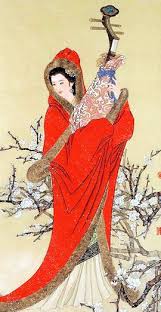