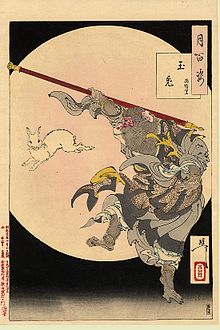 Today we will keep talk about stories about the Mid-Autumn festival and they are great entertainment for tonight’s moon gazing.

Last night we talked about a beautiful woman called ChangE 嫦娥 flew to the moon after eating the elixir of life. She lives in a palace on the moon 月宫or 广寒宫. In the book YiShi 逸史, it mentions a story of the Emperor XuanZong of Tang 唐玄宗 had a dream of visiting the palace of the moon.

In the book WuJingTongYi 五经 通义, it says, there is a rabbit and a toad on the moon. In the book YueFuShiJi 乐府诗集, it says, the rabbit is pounding medicine for the mortals with a mortar and pestle. Later we call the moon rabbit as Jade Rabbit 玉兔, as a companion of the lonely goddess of the moon ChangE 嫦娥. If you saw the Japanese cartoon Sailor Moon, the main character Sailor Moon’s name is Usagi Tsukino meaning Moon Rabbit. In the book Journey to the West 西游记, the monkey king fought with the Moon Rabbit. 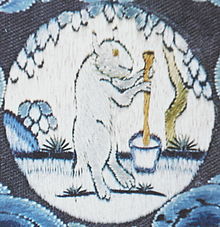 In the book HuaiNaiZi 淮南子 from the Han dynasty 汉朝, it says, there is an osmanthus tree on the moon. The osmanthus tree is native to Asia. The tree flowers during the autumn. The flowers is also know as sweet osmanthus, tea olive, sweet olive and so on. The flowers have a special fragrance and are infused with tea and made into jam.

In the book JiuYangZaZu 酉阳杂 俎from the Tang dynasty 唐朝, it says the osmanthus tree on the moon is 500 zhang 丈, which is around 1500m. There is a person cutting down the tree. This man is called WuGang 吴刚, the Chinese Sisyphus because the tree is self-healing so he has to keep chopping the tree.There are a lot of variations about why Wu Gang is on the moon. In some stories, it says, WuGang murdered his wife’s lover, who is the grandson of Emperor Yan 炎帝 after he found out about the affair. So he was banished to the moon where he would cut down the tree. Some historians think the story of WuGang and the tree was originally from the imagination of the shadows on the moon.

I will finish our episode with part of the conversations between Houston control center and the Apollo 11 crew before the first moon landing in 1969: