Today we will talk about one of the earliest goddess in Chinese mythology and Taoism – XiWangMu 西王母, Queen Mother of the West. We have mentioned her a few times in our podcast before. In episode 21, Queen Mother of the West separated the loving couple ZhiNv 织女, the Weaver girl and NiuLang 牛郎, the Cowherd with her head pin which became the Milky Way. She sounds like a cruel, cold-heart goddess, which is partly true if we consider the origin of the character. 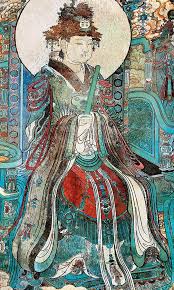 As time goes by, between Warring States period to the Han Dynasty, the image of Queen Mother of the West gradually become more soft and feminine. In the book MuTainZiZhuan 穆天子传, Tale of King Mu from the Warring States period between 5th century BC to the year 221 BC, a fantasy version of the travel of King Mu of Zhou, the sovereign of the Zhou dynasty 周朝 around 900 BCE, it mentions a love story or a fling which I think is more accurate between the Queen Mother of the West and the King Mu when he traveled to the west of China. In the book Queen Mother of the West is a beautiful exotic woman who is also is excellent dancer and singer. During the short time they hang out together, they drank wine, danced and sang until the day King Mu left and they never met again.

Since the Hang Dynasty 汉朝, Queen Mother of the West became a goddess in Taoism and started becoming a real holy goddess we see today. She is depicted dressing like a queen holding court in the palace on the Mount Kunlun 昆仑 山. The palace is described as a paradise where she meets with deities. In Taoism, she has the highest status in all the goddess.

In our episode 73 we mentioned she has a garden where the peaches of immortality grow there. This is also mentioned in the book Journey to the West 西游记. Queen Mother of the West serves the peaches to her guests when the peaches are ripe, which is every 3000, 6000 and 9000 years. She also has the pills of immortality, which we will mention her in another story in the future episode.

In the folklore, it is said Queen Mother of the West is the wife of the Jade Emperor 玉皇大帝 although it is not the case in Taoism. So the couple’s position is like the Chinese folklore version of Zeus and Hera in Greek mythology. 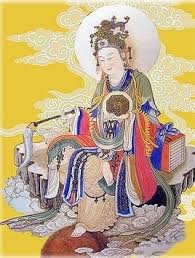