Today we will talk about the last immortal in the Eight Immortals 八仙. Finally we talk about all eight of them. If you want to know about other immortals please check out our previous episodes.

The 8th immortal is called Han XiangZi 韩湘子, who represent the young. He is depicted carrying a Chinese flute and it is believed that he is the composer of a Taoist musical piece Tian Hua Yin 天花引. LvDongBin 吕洞宾, another immortal from the Eight Immortals was his master.

It is said HanXiangZi is the grandnephew of Han Yu 韩愈, a famous Chinese poet and politician of the Tang Dynasty 唐朝, between the year 768 to the year 824. He had a significant influence on the development of Neo-Confucianism 宋明理学 and a part of the Neo-Confucianism was to reject superstitious elements of Taoism and Buddhism that influenced Confucianism after the Han Dynasty 汉朝. So you can image how much the people believed Taoism and Buddhism hated Han Yu.

During the year 819, the Emperor XianZong of the Tang Dynasty 唐宪 宗 arranged a ceremony for a Buddhist relic to be escorted to the imperial place and encouraged people to worship the Buddhist monasteries. HanYu, since he strongly stand for Neo-Confucianism, advised the emperor against doing so. The emperor was angry and exiled him to ChaoZhou, far south in China. In the history, Han Yu wrote three poems to his grandnephew Han XiangZi. One of the poems is the famous Zuo Qian Zhi Lan Guan Shi Zhi Sun Xiang 左迁至蓝 关示侄孙 湘I remembered it was requested to memorize in school as a kid. It is about Han Yu’s unfortunate destiny that he couldn’t fulfill his political dreams and was demoted at an old age. He wrote the poem to his grandnephew that it was nice of him to accompany him on the long trip to the remote south and maybe he could take care of his funeral some day.

In the history there isn’t much thing recorded about Han XiangZi. However, since he was designated by Han Yu to take care of his funeral after death, the Taoism people created the character Han XiangZi in Chinese mythology as a Taoist immortal. The point is that although Han Yu was against Taoism and Buddhism, in the end, his life and death was blessed by the Taoism. It is kind of ironic for Han Yu I think.

In the book YouYangZaZu 酉阳杂 俎, the story says, Han Yu had an grandnephew who lived in the region of Huai River. Han Yu instructed him to study in a Confucian school, however, he had no interests studying and bullied other students. Han Yu then arranged him to study in a Buddhist school, the abbot complained that he was reckless. HanYu scolded him that he could do nothing. While the grandnephew replied he could change the colors of MuDan 牡丹, a kind of flower native to China, looking like peony. He claimed that he had special magic powers and demonstrated it in front of Han Yu. I think this story was created as a metaphor of history. Han XiangZi, the grandnephew, is a metaphor of all the people believed Taoism who had different theories with the Confucianism and Buddhism. 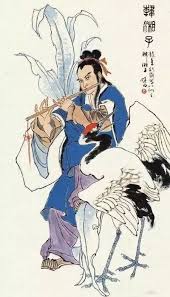