It has been a while since the last time we talked about the remote nations of the world. Today will be the third episode of this series of stories.

In the book ShanHaiJing 山海经, Classics of Mountains and Seas, it mentions a place called NvZiGuo 女子国, meaning the Kingdom of Women, kind of like the Amazons. It says NvZiGuo is in the north of the place called WuXian 巫咸 where there were two women living together. The kingdom is surrounded by water. So I feel like this earliest context from the 4th century BC described two lesbians living on an island. The historian GuoPu 郭璞 , from the year 276 ~ 324 noted the book that, there is a yellow pond in the kingdom where the woman can give birth after they shower in it. If they give birth to boys, the boys die at the age of 3. Other books including DaHuangXiJIng 大荒西经, HuaiNanZi 淮南子 also mentioned this kingdom of women. In the book HouHanShu 后汉书, it says there is a magic well in the kingdom, the woman there get pregnant after peeking the well.

In the book LiangShu 梁书, it mentioned a kingdom called NvGuo, where women there are beautiful and long hair to the ground. They also get pregnant in water. Those women don’t have nipples on their boobs. Instead, on their back neck, there is milk coming out from gray hair to feed their children. The kids can walk after 100 days and be fully grown after 3~4 years. There is a chapter in the book Journey to the West 西游记, where the main characters traveled to the kingdom of women and we will spend a whole episode about it in the future. 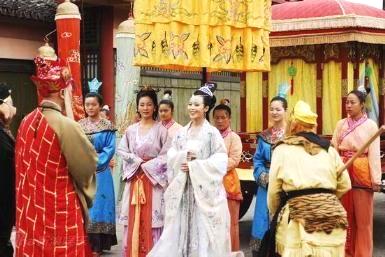 If there is a kingdom of women, there must be a kingdom of men. In the book ShanHaiJing 山海经, Classics of Mountains and Seas, it says, there is a place called ZhangFuGuo 丈夫国, meaning the Kingdom of Men is in the north of the place of WeiNiao 维鸟, where everyone carries a sword.

The historian GuoPu 郭璞 noted that, dating back to the Shang Dynasty 商朝, around 1600 BC~ 1046 BC , the Emperor sent a person named Wang Meng 王孟 to collect medicine from XiWangMu 西王母, Queen Mother of the West, a goddess in Taoism. Wang Meng ran out of his food when he traveled to this place and got stuck there. He ate fruits from the trees and wore barks as clothing. He never got married however had two sons coming from his back. This place became the Kingdom of Men.