When Lanzhi reached home, as a divorced woman, what she faced from her family was doubt and blame. “Daughter, I let you learn how to weave, embroider, sew when you were young. You could play lute and knew classics, prose and verse at a early age. How proud I was when you got married. Tell me the reason of your return.” “I never failed to do my duty.” said Lanzhi. The mother wept for her daughter’s fate.

Upon the tenth day after her return, a matchmaker came to woo Lanzhi for the son of the town official. Her mom was hopeful again and glad her divorced daughter could still have admirers. She said,”Child, if it pleases you, please consent.” Lanzhi replied,”dear mom, Zhongqin and I both vowed eternal constancy. If I broke my words, remorse would haunt me till the death. Please tell the matchmaker so.” Lanzhi’s mother loved her daughter and didn’t want her to suffer. So the matchmaker went off.

After several days, another matchmaker to woo Lanzhi for the son of the chief officer of the county. Lanzhi’s mom told the matchmaker like last time, “my child has vowed that she would never marry again. I don’t think anyone could change her mind.” However, Lanzhi’s brother, the tyrant of the households, spoke harshly to Lanzhi, ”did you see the situation here girl? How much this can profit you? Your ex-husband was nobody. Now you have a chance to marry the county official’s son. If you turn down this offer, you can’t stay at this house.” Poor Lanzhi replied,”brother, what you said is right. What can I wish for after the divorce. I have no hope to be back with Zhongqi again. Please arrange the wedding for me.”

The perfect day for the wedding was chosen, which was a few days after. The wedding was under preparation. In the house, the bride, was making her own wedding gown in desperate. Suddenly, she heard a horse’s anguished neigh. Indeed, it was Zhongqin, her husband, who heard the news of the marriage of her and rushed back from work. His presence filled Lanzhi with joy and pain. She sighed,”Zhongqin, my love, all we hoped is a dream now. My family is the one I can’t disobey. What more can you expect of me?” Zhongqi, in deepest pain, squeezed the words, ” may you be rich and happy with your new marriage. The rock stands while I fear the vine lost the toughness too easily. For me, death shall be my fate.” 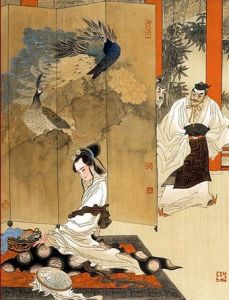 Lanzhi got stung in her heart, “why say such cruel thing to me Zhongqin? We both suffer. Let us both die and be one flesh forever. ” Zhongqin went home and straight to his mom. He bowed and said,”the weather changed, mother. Cold. A terrifying wind sears leaf and tree. The frost congeals all the flowers. And Zhongqin, your son’s life too, draws to its close. Forgive me to leave you alone. Wish you longevity.” The mother pitied him in tears, “what great prospects lie ahead in life. Why should you think of death? As I told you, I will set up your marriage with the girl from the neighborhood soon. You will have a long happy life. ”

The day of the wedding came. “this is the day” Lanzhi said to herself, “my journey’s end.” She took off her silk sliders and waded into pond barefoot. Hearing the news of the death of Lanzhi, Zhongqin turned southeast, beneath the trees in the courtyard, he committed suicide as well.

The families buried the lovers besides the Mountain Hua and grew pine trees around the graveyard. Two birds dwell in the branches and sang to one another all night long.