How many countries are there in the world? Country is an informal word for what political scientists use the words “sovereign state”, which means a place with borders and independent government. In that sense, there are 195 countries. So 195, not including other regions on the earth don’t fit in the definition. How much do we know about the other part of the world? People like to talk about the exotic traditions from a place far away even today.

From this episode, we will use several episodes to talk about those remote nations of the world in Chinese mythology like Gulliver’s travel. Most of those kingdom or nations are from the book Classic of Mountains and Seas 山海经 from the 4th century BC we mentioned so many times.

In the book Classic of Mountains and Seas, it says there is a nation called JieXiongGuo 结胸国 in the southwest. Jie means lumps. Xiong means chest. Because the people there all have a lump on their chest kind of look like a huge Adam’s apple on the chest as noted in the book TuZan 图赞. The picture of people from this nation were depicted by imagination which reminded me of roster’s chest. 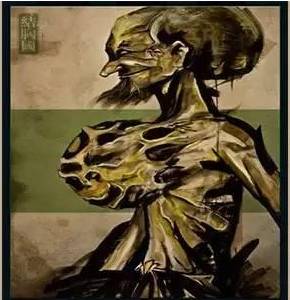 The second nation is called GuanXiongGuo 贯胸国, another nation with people having interesting chests. Guan means throughout. It says in the book Classic of Mountains and Seas, GuanXiongGuo is in the east and people there have a hole throughout their chest. You know it is normal right like a piercing in the chest. In the book HuaiNanZi 淮南子from Han Dynasty 汉朝, it also mentions the hole on the chest is throughout the body. In the book YiYuZhi 异域志from Yuan Dynasty 元朝, it says, the people in the upper class would be carried by the lower class people by a pole through their body hole. The idea is like a stretcher except there is no canvas in the middle needed. Pretty convenient right?

Since the records about this nation is beyond imagination, there are a lot of historians throughout the history discussing about it. In the book BoWuZhi 博物志 from Jin Dynasty 晋朝, the author made up a story to explain the origin of this nation. It say, during the time Yu the Great 大禹 assembled many gods to discuss how to stop the Great Flood, only FangFeng Shi 防风 氏was late. FangFeng Shi is a gaint deity in Chinese mythology. Yu the Great was very angry and killed FangFeng Shi. After the flood, two dragons arrived from the sky. Yu the Great sent his assistant to visit the regions where flooded. When he passed the region ruled by FangFeng Shi, two of FangFeng Shi old generals planned to revenge. Just as they were about to shoot the assistant, heavy winds started the blow and then storms fell. The two dragons flew into the sky. The two generals were scared to death and committed to suicide by stabbing themselves into the hearts using a dagger. Yu the Great found out eventually and replaced the daggers in the chest with an immortal plant. So they are the ancestors of the people from ChuanXiongGuo.

Some historians have the assumption that maybe the clothing those people wearing with some part near the chests looked like they had a hole in their body. There are some regions in the world like southeast Asia today have the religious practice that they would pierce some parts of the body like face, belly, hand, tongue with a long sharp iron pole. But anyways, this is a myth story and I would like to think them as people having a hole throughout their chest and being carried by a pole through the hole.

山海经 Classic of Mountains and Seas