Today we will talk about a ghost story from Strange stories from a Chinese studio 聊斋志异. This is one of most well-known stories from the book maybe because there are a few movies based on the story and the movies are nightmares of a lot of kids. So it is a serious scary story this time. Watch out!

There is a guy whose last name is Wang 王 from Taiyuan 太原. This Mr Wang walked on a street one day one morning when he met a young girl carrying a bundle by herself with heavy legs. Mr. Wang caught her up and found she was a really beautiful girl around 16 or 17 years old. He had a crush immediately and inquired the girl why she was by herself early in the morning. The girl replied, “a stranger like you cannot alleviate my distress.” Mr. Wang kept asking”Just let me know what is bothering you. If there is anything I can help I will try my best,” “It was my parents,” answered the girl”they love money more than anything and sold me as a concubine to a rich guy whose wife was very jealous and abused me every day. I can’t bear this life anymore and I am running away.” “Where are you going now?” “Who knows” Mr. Wang offered “my house is not far from here. What do you think about coming with me?” The girl gladly accepted and followed him to his house.

Mr. Wang showed her his study room where she could stay. The girl said “this is a very nice place. But, if you are really doing me a favor please keep the secret and don’t tell anybody about me” Wang promised and they stayed there together in the study room for a couple days and became lovers. Then he told his wife. I know he was married and now had this new girl as a lover. I mean in ancient China, a man could marry a wife and other concubines so his wife wasn’t thinking it was that a big deal. However his wife was worried that they might get in troubles if the girl belonged to some very influential family and he should send her back. This, Wang would not consent to do since he was so attached to the beautiful girl.

One day, wandering in a market, Wang met a Taoist priest who looked at him in astonishment and asked him, “What had you met recently?” “Nothing.” Wang replied. “I can tell you are bewitched.” The Taoist priest assured. But Wang insisted it was nothing then the priest left saying, “What a fool! Some people don’t seem to know when they are going to die. ” The words startled Wang and he suddenly thought of the girl but then he reflected that how could such a beautiful be a devil. He told himself maybe the priest just wanted to scare him to do a business.

When he was back home he found the door of his study room where the girl stayed was locked inside and he couldn’t get in. He started get suspicious and climbed over the wall where he found the inner door was shut as well. Creeping up softly, he looked through the window. Oh No! He saw a hideous devil with a green face and jagged teeth. Guess what he was doing? He was painting on a human skin spreading on the bed. Then the devil gave the skin a shake out and put it on as a coat. The beautiful girl was there again. Extremely terrified, Wang crawled out in search of the priest who had gone already. In the fields far away, he finally met the priest. Wang threw himself on his knees and begged the priest to save his life. “This creature must be in bad condition since he just found a substitute body. I don’t want to hurt him.” said the priest. Instead of killing the devil, he gave Mr. Wang a fly brush and told him to hang it at the door of the bedroom. 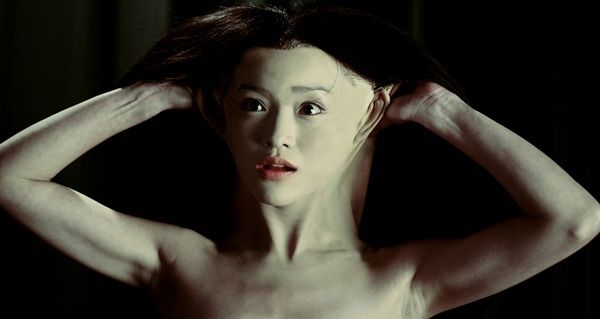 Wang went home being afraid to enter the study room. He hung up the brush. Not daring to move, he made his wife to see what’s going on. What a coward! She saw the girl looking at the fly brush hesitating to pass. The girl left very angry. But in a little while she came back and cursed the priest, “do you think I am going to spit out my food already in my mouth?!” Thereupon she tore the brush to pieces and broke the door of the bedroom. She walked straight to the bed where she ripped Wang’s belly and tore out his heart before she left. So Mr. Wang lost his life just because of his lust. Wang’s wife watched the whole thing and screamed out. The servant came in with lights and of course Mr.Wang already dead.

The next morning, Wang’s wife sent Wang’s brother to talk with the Taoist priest. “I had compassion for the creature. How dare he did this!” The priest was in a great rage and followed Wang’s brother to catch the devil. The devil already disappeared from the house. The priest looked around and said “luckily she’s not far” and asked “who lives in that house in the south?” Wang’s brother said he did. The priest then declared that the devil was there. Wang’s brother was horribly frightened and inquired his family since he wasn’t home in the morning. Apparently there was an old women looking for a job as a servant and his wife kept her in the house. The priest confirmed and said “That’s her!” With a wooden sword he stood in the center of the yard, the priest shouted, “base born beast, give me back my fly brush!” at the mean time. The old lady suddenly tried to run away however, she got caught.

The human skin dropped off, she turned into a hideous devil again and grunt on the ground like a pig. The priest cut off the devil’s head. A dense column of smoke curled up and then drawn into the priest’s gourd. People gathered to check the human skin which was so delicate. The priest then rolled up the skin as a scroll and was about to leave when Wang’s wife stopped him with tears and begged him to bring her husband back to life. The priest was unable to do it himself however he said “ I can direct you someone you can ask. There is a maniac in the market who always grovels in the garbage. You need to prostrate in front of him. Even if he insults you never show any disrespect or anger.”

So Wang’s brother went with his sister-in-law to the market. They saw a filthy homeless man singing some weird songs. He was so smelly that everybody walked far away from him. Wang’s wife didn’t care. She approached him on her knees, at which the maniac laughed and said, “Hi beautiful! Do you love me?” She told him she wanted her husband back. The maniac laughed again, “you can get plenty of guys out there. Why do you want him?” Good question. She tried not to get ashamed and kept begging him. The maniac started punch her with a stick and said, “you are strange to ask me to raise the dead like I am YanWangYe 阎王爷” She didn’t make a sound of pains or get angry. Crowds of people started to get together to watch this show. The maniac spit a blob of gross and filthy sputum and forced her to swallow. She was going to throw up. Convincing herself with the Taoist priest’s words, she at last swallowed it. “Hahaha this beauty loves me” the maniac laughed and left without looking back. She followed him all the way to the temple where he disappeared.

Wang’s wife had no way but went home with so much shame and also enormous desperation from her husband’s death. She held her husband’s body and mourned and cried. When suddenly she felt a lump in her throat, she threw up with a pop falling straight into the belly of her husband. Looking closely, it was a human heart throbbing with heat. She bound the wound with a piece silk and rubbed the body. The body started to warm up. In the morning, Mr Wang was alive again who told people it was like a dream feeling a pain in his heart.

In the end, the author commented : People are so foolish to regard devils as beauty and honest words as crazy words. The consequence of lust is letting your wife eat other people’s spit. An eye for an eye. It is so pathetic that the foolish can never understand.