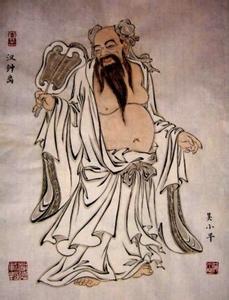 Today we will keep talking about the Eight Immortals 八仙. There is one immortal kind of looking like TieGuaiLi we talked about last time. I had a hard time to distinguish them when I was a kid. His name is ZhongLieQuan钟离权or HanZhongLi汉钟离. He is usually depited with his chest and belly bare and two wisps of hair like a girl’s hair and a long beard down to his belly button. He is also depicted laugh in a lot of images. His powerful tool is a huge fan which can make fire like a blowtorch.

In the book LieXianQuanZhuan列仙全传, it says, HanZhongLi was from a place called Yangtai燕台, he was a general who was forced to flee into the mountains after being defeated by Tufan吐蕃, which is near Tibet today. In the valleys and mountains, he got lost in the forests where he ran into a monk who led him to a sanctuary and said,” this is where Sir Donghua东华先生lives” and the monk left. After a while, HanZhongLi saw a guy wearing white deer hide with a green crutch and asked, “aren’t you the general HanZhongLi from Han Dynasty? ” HanZhongLi was shocked that he was recognized and thought this guy was not usual. He started leaning Tao there including the ways of the immortal rituals with that guy and later with HuaYangZhenRen华阳真人 and Wang Xuanfu王玄甫, who are all Taoism immortals. ZhongLieQuan himself is known as ZhengYangZuShi正阳祖师 in Taoism.

HanZhongLi represents the rich people since he was born in a rich family and his dad was related with royalty, which gave him chances to become a famous general. As we mentioned in the story he started to learn Tao because of he failed in a battle like a lot of people try to find help from religions after facing obstacles in the reality. Also his magical fan can transform stones into silver or gold as he learned alchemy which is an important part in Taoism.

Like a lot of legendary people in mythology, HanZhongLi was born to be different. According to a forktale, there was a giant went into the room on the day he was born and claimed to be HuangshenShi黄神氏, a god from the ancient time. He said he would reincarnate here. Then bright beams of lights filled the room like fire. He was as big as a 3-year-old when he was born. He had a round face and big forehead, big earlobe , long eyebrows, deep eyes and square mouth. Basically he looked like he has a good fortune. You know Chinese people really believe physiognomy and claim to tell people’s fortune just from faces. He kept silence until the 7th day after he was born. The first sentence he said was “my feet have wandered in the purple palace and my name is recorded in the capital of the Jade Emperor 玉皇大帝”. I guess this kid is special after all.