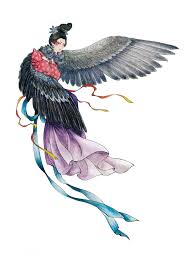 In the west there are a lot of fictional characters only showing up during night time like vampires cat women or batman. I guess stories happened in the dark are more mysterious and adds the element of horror. Today we are going to talk about a bird appearing during nights called GuhuoNiao 姑获鸟 which is also a woman ghost called YeXingYouNv 夜行游女 or TianDiShaoNv 天帝少女 and it later got popular in Japan in Japanese it is called Ubume.

In the book XuanZhongJi 玄中记, it says GuhuoNiao appears during nigh time and hide during the day. Since it is a bird woman, it transforms shapes by taking off or putting on the feather coat. GuhuoNiao doesn’t have kids and likes to catch other people’s children and raises them. If she sees children’s clothes outside in the nights, she would mark the clothes with blood dots and later would get the kids. Another story to scare kids to behave well?！In the book QiDongYeYu齐东野语, it says if you hear the birds, to avoid tragedies you have to let dogs to scare the birds away and turn off lights.

In the book TianZhongJi天中记, it says GuhuoNiao could suck people’s souls. The originally Chinese myth doesn’t mention the reason. The Japanese myth modification is that the woman was died during labor and that’s why she is obsessed with stealing kids. Giving born to children is always a thing to celebrate. However, in the ancient time, a lot of women died during the labor cause of the limited knowledge of science and bad hygiene situations. There are a lot of details about how the bird steals kids and the sacrificial mother in the Japanese version. Japanese are pretty obsessed with this story since at least 12th century maybe it involves woman in labor, children and blood. There is a popular Japanese detective novel called The Summer of Ubume from the 90s and later was made into a movie in 2000s. 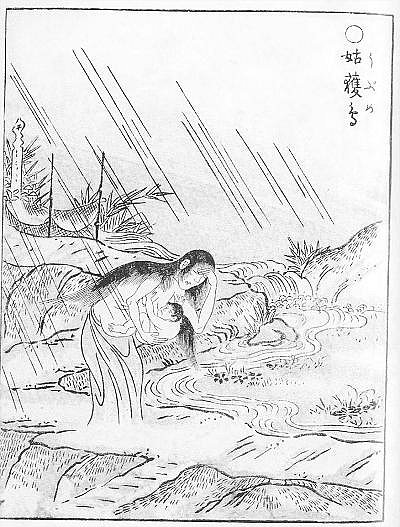 In Chinese mythology, GuhuoNiao is related with another mythical bird called nine-headed birds 九头鸟 . In the book XuanZhongJi, it says there was a guy one day saw 6 or 7 women in the fields and sneaked to steal a feather coat on the ground. Later the women flew away like birds only one left. The guy married her and had three daughters. One day the wife let the daughter ask their father where he put her feather coat. After finding out she flew away so did the three daughters. After that people called the birds GuicheNiao 鬼车鸟or JiuTouNiao 九头鸟, nine-headed birds.

Some people say the concept of nine-headed birds probably based on owls since they appear at nights. Apparently nine-headed birds are evil in Chinese mythology. However, in Classics of Mountains and Seas 山海经, the earliest book mentioned the bird was worshiped a holy bird and called the nine-headed phoenix. Later due to historical and political reasons, the bird became an evil mythical creature. 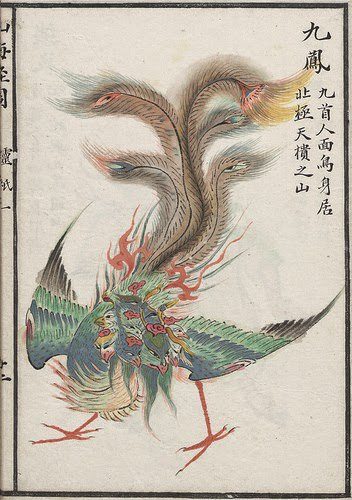 There is a funny story in the book YuLiZi 郁离子from Ming Dynasty 明朝 about the nine-headed bird. It says whenever the bird get food, all the heads would fight for it. They scream and peck each other. In the end all the heads got hurt and a duck saw it and laughed said, “ what are you fighting for? Do you know you only have one stomach?”