Before we start the story, I want to mention a book where this story is from. It is called LiaoZhaiZhiYi聊斋志异, strange stories from a Chinese Studio, one of my favorite books. It is weird because I don’t really read or watch any horror books or movies , however, this is a ghost book. It is a collection of stories about ghosts and immortals. I don’t think this book is really horrify to read since the purpose of book is not to scare the readers and there are a lot of love stories between a poor young intelligent man and a beautiful fox spirit. If you know one of Neil Gaiman’s Sandman books called the Dream Hunters, you know what I am talking about. Neil said his book was based on an old Japanese folktale by Ozaki. I think Ozaki definitely was inspired this Chinese book since it came out hundreds years earlier. LiaoZhai聊斋in the name LiaoZhaiZhiYi is the name of the author PuSongling蒲松龄‘s study room or studio. In the ancient Chinese, literati and scholars always named their study rooms to represent their spiritual and intelligent interests. PuSongling was a very knowledgeable and talented scholar from Qing 清Dynasty, between the year 1640 to 1715. However, he wasn’t very lucky in the imperial examination in his life so he couldn’t get a position in the government. He spent his life as a tutor. Some people say the reason he didn’t get a good ranking in the exam is that he was not a very good looking guy and the corruption of the society. So his stories are about ghosts and spirits but not really. He used his stories as a weapon to describe the skewed feudal system and the unfair examination system. The love stories are his fantasies for me. As a poor scholar himself, who doesn’t desire love from a beautiful and pure girl who loves him and helps him overcome difficulties? Maybe not from the reality since it is hardly possible, but a girl who is a fox may make his dream come true. Throughout history, the image of fox spirits is a mixture of good and evil just like human. I love those stories and definitely will talk about more in the future. 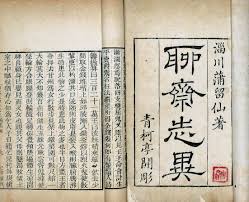 Today I am going to tell a cute story about a fox guy. Yeah, in this book, besides fox ladies there are fox guys, fox families, and etc.. There was a guy named CheSheng车生. He could barely support his life expanses, however, he liked drinking. He couldn’t fall asleep without having three glasses of alcohol. Maybe he was an alcoholic and he always had booze at home. One night, he awoke from sleep in the middle of night and found a person sleeping on his bed. At first, he thought it was his clothes which he used as a blanket. And then he touched it and it was very furry. He carefully looked at it under the light and found out it was a fox. He found his empty liquor bottle next to it and smiled and said, “ this is my drinking buddy!” He didn’t even get suspicous or scared but happy. So he went back to bed with the fox. During the night, the fox woke up and CheSheng said, “looks like you had a good sleep.” It turned out that the fox was a good looking young guy. In a lot of Chinese spirits stories, the spirits would change back to their original forms like fox in this story when they are drunk or in bad condition. Other times, they show up as human shapes. The fox guy keeled down and thanked CheShengthat he didn’t kill him. CheSheng said, “ I love drinking and people think I am crazy. But you understand me. If you don’t mind, let’s be drinking buddies. You can come and visit whenever you want.” Apprently, CheSheng already treated the fox guy as his friends. And they went back to sleep again.

The next morning, when Che Sheng woke up, the fox guy already left. He prepared a whole bottle of wine just to wait for the fox. When night fell, the fox guy came. They talked and drank. The fox guy had a pretty high alcohol tolerance and very humorous. They felt like they knew each other for a long time. The fox guy said,” You have been treated me with great wine couple of times. How should I pay you back?” Che Sheng said,” It was just a little bit of wine. Don’t worry about it”. The fox guy kept saying “ You are not very rich and I will help you with the money for drinking.” So the next night , the fox told Che Sheng,” Go to the Southeast direction for 7 miles, you can find money somebody lost on the road. Go and get it as soon as possible.” The next morning, Che Sheng did what he was told and found 2 grands. He bought dishes and wine for the night with the fox. The fox told him again, “ there is money in the basement in the backyard. Somebody hid it. Go and get it.” The fo guy is just like a money detector! Che Sheng never got suspicious and did it again. Of course, he found money again. This time there were thousands of money. Che Sheng was happy and said,” I have money now and don’t have to worry about drinking.” The fox said,” you will spend all of it one day. Let me think of something else.” The next night, the fox told Che Sheng, “ the price of buckwheat in the market now is pretty low. This is good stuff and go and store some.” This fox even has a knowledge of markets and business! Che Sheng bought 40 shi石 of buckwheat. Shi is an ancient Chinese unit of weight. 40 shi is maybe more than 2 tons of buckwheat. People in the neighbor hood laughed at him. After not too long, it was the dry season, all the wheat and beans were dead in the field. Only buckwheat survived. So Che Sheng sold the seeds of buckwheat and made 10 times of money he invested. From then on, he became a real rich man. He bought 200 acres of fertile fields and followed the fox’s advises about when and what crops he should plant. The fox is an expert of argriculture now! They had been best friends and drinking buddies. The fox had good relationship with Che Sheng’s wife and regarded Che Sheng’s children as his own. After Che Sheng died, the fox guy never came back again. What a great friend the fox is. He was smart and knowledgeable. They were never suspicious of each other and were life long friends. I can definitely imagine the author was drinking in his studio alone at night and wished there was a great booze buddy drinking along. Maybe he did see a fox outside of the window and wrote down this story.

聊斋志异LiaoZhaiZhiYi/Strange stories from a Chinese studio